Controlled fusion power has been a tantalizing prospect for decades, promising a source of endless carbon-free energy for the world. Unfortunately, persistent technical challenges have kept that achievement on an ever-receding horizon. But recent developments in materials science and superconductivity have changed the landscape. The proposed SPARC experiment of MIT’s Plasma Science and Fusion Center (PSFC), in collaboration with the private, MIT alumni-led company Commonwealth Fusion Systems, is poised to use those breakthroughs to build the first fusion device that generates more energy than it consumes, bringing commercial fusion energy within practical reach in the near future.

Patrick White, a PhD candidate in the Department of Nuclear Science and Engineering (NSE), is looking ahead to that long-awaited day. His PhD project, funded by the Samuel W. Ing (1953) Memorial Fellowship in the NSE department and PSFC, anticipates the many questions that will follow a successful SPARC project and the development of fusion power.

“How do you commercialize this technology that no one’s ever built before?” he asks. “It’s an opportunity to start from scratch.” White is focusing on the regulatory structures and safety analysis tools that will be necessary to bring fusion power plants out of the laboratory and onto the national power grid.

He first became fascinated with nuclear science and technology while studying mechanical engineering at Carnegie Mellon University. “I think it was the fact that you can take a gram of uranium and release the same energy as several tons worth of coal, or that a single nuclear reactor can power a million homes for 60 years,” he remembers. “That absolutely blew me away.” He saw commercial reactor technology up close during an undergraduate summer internship with Westinghouse, and followed that with two summers in Washington, DC, working with the Defense Nuclear Facilities Safety Board.

When White came to MIT for graduate work, he joined the MIT Energy Initiative’s major interdisciplinary study, The Future of Nuclear Energy in a Carbon-Constrained World, authoring the regulation and licensing section of the final report (which was subsequently released this past September). He began casting about for a PhD topic around the time the SPARC project was announced.

“How do you commercialize this technology that no one’s ever built before?” White asks. “It’s an opportunity to start from scratch.”

The goal of SPARC is to demonstrate net energy from a fusion device in seven years—a key technical milestone that could lead to the construction of a commercially viable power plant scaled up to roughly twice SPARC’s diameter. Because the fusion process produces net energy at extreme temperatures no solid material can withstand, fusion researchers use magnetic fields to keep the hot plasma from coming into contact with the device’s chamber. Currently, the team building SPARC is refining the superconducting magnet technology that will be central to its operation. Already familiar with the regulatory and safety framework that’s been developed over decades of commercial fission reactor operation, White immediately began considering the challenges of regulating an entirely new potential technology that hasn’t yet been invented. One concern in the fusion community, he notes, is that “before we even have a final plant design, the regulatory system could make the ultimate device too expensive or too cumbersome to actually operate. So we’ll be looking at existing nuclear and non-nuclear industries, how they think about safety and regulation, and trying to come up with a pathway that makes the most sense for this new technology.”

His PhD project proposal on the regulation of commercial fusion plants was selected by the PSFC for funding, and he got down to work in fall 2018 under three advisors: Zach Hartwig PhD ’14, the John C. Hardwick Assistant Professor of Nuclear Science and Engineering; assistant professor Koroush Shirvan SM ’10, PhD ’13; and Dennis Whyte, director of PSFC and the Hitachi America Professor of Engineering.

White’s career plans beyond the fellowship remain flexible: he notes that whether he ends up working with the licensing of advanced fission reactors or in the new world of commercial fusion power will depend on the technology itself, and how SPARC and other experimental projects evolve. Another possibility is bridging the communications gap between the nuclear industry and a public that’s often apprehensive about nuclear technology: “At the end of the day, if people refuse to have it built in their backyard, you’ve got a great device that can’t actually do any good.”

For now, White’s fellowship is not only laying the groundwork for his own future, but also perhaps the future of what would be one of the greatest technological advances of humankind. He points out that the stakes are higher than simply developing a new energy technology. “If we’re really concerned about climate change and decarbonizing, we need to have every single tool on the table,” he says. “The more tools, the better.” 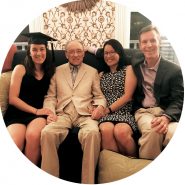 In memory of Samuel Ing ’53, SM ’54, ScD ’59, his family has established a fund to support graduate students at MIT’s Plasma Science and Fusion Center (PSFC) who are taking part in SPARC, the center’s push to create a smaller, faster, and less expensive path to fusion energy.

Born in Shanghai, China, Ing (1932–2018) was mentored by Professor Thomas Sherwood at MIT. Joining the Xerox Corporation after graduation, he rose from senior scientist to principal scientist to senior vice president of the Xerographic Technology Laboratory at the Webster Research Center in Webster, New York. He spent most of his career in western New York with his wife Mabel, who he met at an MIT dance. They raised four daughters: Julie, Bonnie, Mimi, and Polly.

An innovator and advocate for new technologies, including desktop publishing, Ing became intrigued with MIT’s approach to creating fusion energy after attending a talk by PSFC director Dennis Whyte at the MIT Club in Palo Alto in early 2016. His daughter Emilie “Mimi” Slaughter ’87, SM ’88, who majored in electrical engineering, later expressed her own enthusiasm to her father when, as a member of the School of Engineering Dean’s Advisory Council, she heard Whyte speak in the fall of 2017. Mimi Slaughter remembers her father’s passion for innovation and entrepreneurship.

“It’s the MIT culture,” she says. “I see that in the fusion lab—the idea of just doing it; figuring out a way to try to make it happen, not necessarily through the traditional channels. I know my Dad would agree. He did that at Xerox. He had his own lab, creating his own desktop copiers. That grew out of what he experienced at MIT.”

The Ing family is celebrating that creative spirit with the Samuel W. Ing Memorial Fund for MIT graduate students who will be driving the research and discovery forward on SPARC. It was a class of PSFC graduate students that proposed the original concept for this experiment, and it will be the young minds with new ideas that, with the support of the fund, will advance fusion research at MIT.

Or as Ing said of the ideas behind SPARC: “Very interesting technology. It has a tremendous future, and if anyone can do it, it’s MIT.”