How to Make (Almost) Anything is a community as much as it is a class. From the title of the course, I knew that I’d be stretching my brain and limits as I attempted to master a variety of fabrication skills. However, I never imagined that the best lessons and ideas I’d get in the class would be learned through my peers.

A little background: [MAS.863/4.140/6.943] How to Make (Almost) Anything—taught by Professor Neil Gershenfeld, the director of the Center for Bits and Atoms—is an institution 20 years in the making. Started in 1998, the course was designed to expose technical students to advanced fabrication equipment and techniques, but it ultimately grew into something much more rewarding. In its current iteration, students marry creative visions with technical implementation in empowering and novel ways, ultimately to create a final project that combines all the skills acquired during the semester.

I came up with TRAX (pronounced “tracks”), a toy aimed at teaching the fundamentals of music composition in an intuitive, physical way. I designed tracks of different lengths corresponding to rhythmic values (for example, the longest piece represented a half note, while a track half that length represented a quarter note). Each track had an LED light to indicate note value (for example, if the track LED was red, it would play the note “C”).

Through the marathon of final presentations, what stood out most was how each project reflected its maker’s interest and personality. These final projects showcased the power of making and self-expression in imaginative ways.

And, as a community, we made our projects better. There was a moment during the final push to finish the projects when I nearly gave up. I had been debugging infrared LEDs and phototransistors for hours in the middle of the night. I still couldn’t figure out why the serial monitor kept spitting the same value back at me, no matter how close the LED and phototransistor were. To understand how frustrating this is, you should know that phototransistors are basically tiny cameras that detect defined wavelengths of light and return a value between 0 and 1,024 depending on how much light they see. I figured I must’ve blown up the LEDs, but I had no way to visually inspect because infrared is outside humans’ visual spectrum, and I was way too mentally drained to try to wrestle with a voltmeter.

I switched out all my components, and voilà, it worked! Plus now I had a fun, new way to interact with my musical train tracks, through my phone’s flashlight.

I ran down to the shop to grab new LEDs and one of my classmates, Agnes, stopped me, probably sensing my frantic vibe. I told her my predicament, and then she asked me why I needed to use infrared light. Turns out, she was using components similar to mine (LEDs and phototransistors), but in the visible spectrum to coax a swarm of robots to chase or hide from her phone’s flashlight. She’s brilliant. Anyway, I switched out all my components, and voilà, it worked! Plus, now I had a fun, new way to interact with my musical train tracks, through my phone’s flashlight, as my new phototransistors would be able to detect white light.

I can point to so many fortuitous exchanges of wisdom over the course of the semester—fleeting moments that challenged my work and ultimately allowed me to create something better than I could on my own. And, for that, I am so grateful. I learned the skills to make—and debug— almost anything, but more importantly, I found that the most rewarding tool is a community to support and inspire each member. 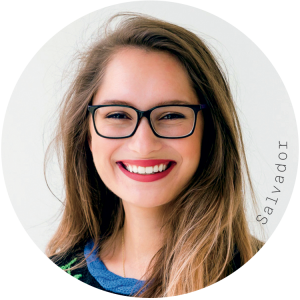 Emily Salvador ’16 majored in computer science and music as an undergraduate at MIT and is now a first-year master’s student at the MIT Media Lab. This essay originally appeared as part of the “Grad Life” series on the MIT Alumni Association’s Slice of MIT blog.