Our cells pump out more than a liter of mucus a day: a slimy line of defense against pathogens, toxins, and viruses. Unfortunately, SARS-CoV-2 seems to sneak past mucus with perplexing ease.

Katharina Ribbeck, the Mark Hyman Jr. Career Development Associate Professor of Biological Engineering, wants to pinpoint exactly how SARSCoV- 2, the virus that causes Covid-19, binds to and travels through mucus. “We want to get to the bottom of mucus’s role as an immune barrier,” she says. 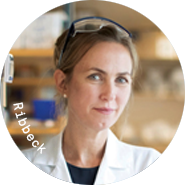 Anyone with a cold or allergies is hyperaware of how continuously the body secretes mucus. But mucus, generally scorned as snot, is not just a product of the nose. Part viscous liquid and part elastic solid, mucus hydrates, lubricates, and transports fluids throughout the body. Dedicated cells adjust the amount and type of mucus secreted depending on the threat detected.

Mucus first captured Ribbeck’s attention when she was studying a different polymer system at the University of Heidelberg. Mucus and its main structural component, biopolymers called mucins, struck her as significantly understudied given their importance in health and disease. Her research to date has drawn attention to the value of mucins, which are now being eyed by the food, agriculture, and biomedical industries for potential use in consumer products.

Bolstering mucus’s role as a security force is its community of microorganisms, or microbiome, which act on toxins and pathogens. Ribbeck and colleagues have identified components within mucus that don’t necessarily kill pathogens but disarm them. Some of these are members of a diverse family of sugars called glycans that protrude from mucin’s bottlebrush-shaped filaments. The exact function of these sugars is still a mystery; Ribbeck calls them “therapeutic libraries” with broad-spectrum effects on microbes, both good and bad.

Within the lungs, these sugars may act as receptors for the signature spike proteins that enable coronaviruses to slip inside a cell and replicate. But sugars in the protective mucosal layer could potentially prevent the virus from entering the cell by mimicking receptors on the cell surface, offering decoy binding sites.

It’s been suggested that influenza A sneaks through mucus by slicing off these decoys. It’s not clear whether SARS-CoV-2 uses this tactic or another means to avoid being trapped in mucus like an insect in tree sap.

An inhaled virus such as SARS-CoV-2 must navigate a relatively thick layer of mucus. Ribbeck says it’s unlikely that viral particles can diffuse through mucus faster than mucus can sweep them out of the body, so SARS-CoV-2 must have evolved a strategy to co-opt or overcome mucus’s defenses. “Something in our understanding of Covid-19 pathogenesis is missing,” she says. Does the virus move through mucus differently than do other particles its size to escape retention? Does it use spike proteins to bind to substances and to propel itself forward, or hitchhike a ride with other microbes?

Exactly how SARS-CoV-2 enters the body is what Ribbeck’s lab has been investigating this year with the help of a National Science Foundation grant. Analyzing samples from healthy and infected patients, both symptomatic and asymptomatic, should help the team understand in more detail how pathogenesis occurs, she says.

Although researchers don’t yet have the tools to precisely tune mucus production within the body, Ribbeck says she and her colleagues are considering ways to engineer, reconstitute, or replenish mucus molecules on body surfaces that have run low or where mucus is not as functional as it should be. There might even be a way to boost the mucus microbiome by supplementing it, the same way that probiotics supplement the gut microbiome.

Repairing or enhancing mucus holds out the hope of a novel approach to foiling viruses such as SARS-CoV-2. “Perhaps it binds to something within mucus in a way that we could potentially disrupt,” Ribbeck says. “Or we could equip the mucus barrier with molecules that trap and clear the virus.” Mucus is already an effective security force; Ribbeck hopes to identify and deliver the extra firepower it needs to overcome a formidable enemy.