The way the brain processes sensory information, especially visual input, determines so much of the human experience. When it comes to machine learning, the visual barrier is a tremendous hurdle to potential applications.

As a postdoctoral fellow in the lab of James DiCarlo, head of the MIT Department of Brain and Cognitive Sciences and the Peter de Florez Professor of Neuroscience, Hyodong Lee SM ’16, PhD ’20 worked toward building an AI model of the brain that acts like a human’s visual cortex. “I concentrated on two things: making computational models more brain-like so we can bridge the gap between models and brains, and using those models to further our understanding of how the brain works,” she explains. “So far, I’ve been focused on the former—building topographic models that can reproduce phenomena we see in the higher visual cortex—and the future direction of my work will be on the latter.” 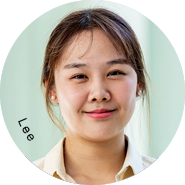 This rapidly evolving field has changed significantly since Lee started as a graduate student at MIT in 2013. “Before, researchers would use more rudimentary computational models,” she explains, “but now we’re using AI models to gather and interpret data.” As data builds on itself, it makes it easier for more advanced models to be built, and the cycle continues. What is it building toward? “A comprehensive spatial mapping of the brain, especially the visual cortex,” she says. “This line of research is important in computational neuroscience as it furthers the understanding of brain. It will also be critical from a brain-machine interface perspective as models become more brain-like.” Now, as a software engineer at Google Research, Lee’s mission is to enable machines to understand and describe video at a human level.

“When I was a little kid, I always enjoyed problem solving, especially mathematical problems,” Lee says. This interest led her to move from her native South Korea as an undergraduate to major in electrical and computer engineering at Cornell University. “I was actually not originally interested in the brain. I didn’t know any neuroscience before I joined MIT,” she says. “I came here to pursue systems biology or synthetic biology, but I was open to different fields as long as they incorporated some modeling. I ended up doing a rotation at the DiCarlo lab and became fascinated with bridging the gap between AI models and neuroscience.”

As a doctoral candidate at the McGovern Institute for Brain Research, Lee was supported by the Lore Harp McGovern Fellowship, which made a tangible difference in her research. “Having a fellowship during my PhD program helped me in multiple ways,” she says. “It made it so I could focus more on the research instead of finding funding. But more importantly, funding gives you freedom in exploring different research areas. If you get funding from other sources, you typically have to stick to the plan that you originally proposed,” she explains. “But research is not always like that. Sometimes different ideas pop up. The fellowship gave me a lot of freedom, and it really helped.”

“Humans are the best resources”

Lee chose MIT for her graduate work over other schools because of the diversity among and collaboration between different research areas. “I knew that MIT had a good environment, especially for computational biology. I knew that if my research interests changed, I would have other good options.” That ended up being exactly what happened when she found the DiCarlo lab.

Although MIT’s computing resources are extensive, and, with the founding of the MIT Stephen A. Schwarzman College of Computing in 2019, growing in revolutionary ways, Lee sees the community of people as the Institute’s most attractive trait. “At MIT, humans are the best resources,” she says. “Collaboration is encouraged between different labs. During my time here, no one has hesitated to collaborate or give advice.” In her long career at MIT, the importance of fellowship funding has become clear. “It really helps in exploring different research ideas and executing those ideas in the lab and the real world, so that these concepts will eventually benefit society,” she says. “A fellowship is about contributing to the science. And that is a really cool thing.”